The elegant white castle was designed by French architects at the request of the noble Mukhranbatoni family. Completed in 1885, its beauty is truly striking even today. In summer and early autumn, the territory of Chateau Mukhrani looks like a fairytale, especially during the harvest celebration. The magic of the period, when the new wine is being created, is hard to describe. Better to arrange a visit to the Chateau, to see the field work and industrial part of the winery for yourself. Head down into the darkness of the cellars and smell the time and labor that are corked in the barrels there… The most outstanding regional wines of Chateau Mukhrani are Goruli Mtsvane (white dry), Tavkveri (red dry) and Shavkapito (red dry). Of course, there are more Georgian grapes, and even locally planted Cabernet and Sauvignon Blanc, but those are from the Kartli region, born, grown and cultivated in this soil. The richness of Georgian nature processed in the European manner – that’s what makes them taste so extraordinary 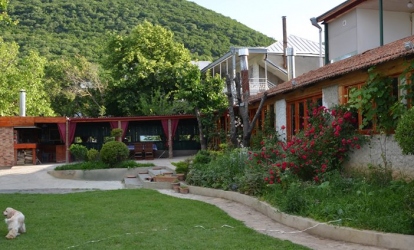 Besides historical exhibits, this unconventional museum describes the stories of people and events that have left their mark on the history of Georgian flavors, and predicts the future of Georgian gastronomy with new flavors, technology, studies, and the results of experiments with Georgian ingredients conducted in cooperation with the world’s celebrated chefs. The museum incorporates a scientific research lab where, with assistance from prominent scholars, the scientific study of the history of Georgia’s gastronomy, culture, old and new flavors, tastes and aromas, is in full swing. Our 30-minute lecture video will introduce you to the key topics of Georgian flavors and gastronomic culture. The legendary Medea’s collection of herbs, 58 plants in all, is used to enrich the museum’s unique menu. Here you can savor some of the revived ancient dishes, such as 1) a menu from the early Middle Ages (5th-8th centuries), 2) the Golden Age menu from the era of King David the Restorer, Queen Tamar, and Shota Rustaveli, and 4) the menus from the early and late 19th century, unmistakably influenced by the then new era, new flavors, ingredients, and technologies. Taste, smell, and memory make up the face of any nation. Georgian tastes and flavors have been forged on the crossroads between Asia and Europe, which is why Georgian cuisine is colorful and diverse, abundant, exciting and gripping, and independent, all of which enables us to reconstruct some of the events that took place throughout the centuries in Georgia, a country linking the West to the East. The museum also features an organic winery producing three types of wines: Rkatsiteli, Saperavi, and Rosé, also a shop carrying spices and other organic Georgian goods. The museum and restaurant are open from noon to midnight (closed on Monday). On weekends, the establishment holds new menu tasting sessions from 5 PM to 10 PM. The museum’s idea was conceived by journalist and TV host Esma Kunchulia.